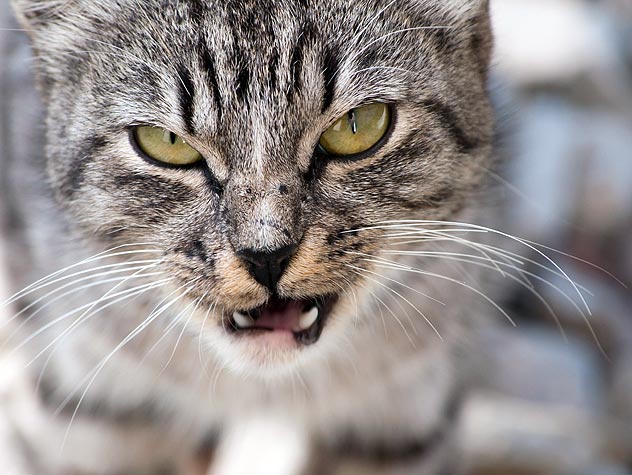 Aggression is a natural behavior that cats use for survival or to ward of a perceived threat, this can be directed at people, other cats or animals. All animals display aggression unfortunately if unprovoked or doesn’t seem to be appropriate, it is not a desirable behavior to have to live with. Aggression displays in cats range from cats that hiss and avoid the threat to cats who violently attack. All aggressive displays should be taken seriously and can be potentially dangerous.

Most aggressive display are due to your cat being defensive, there are very few animals in the world that just out rightly attack. There are many types of aggression and a correct diagnosis is paramount. This should only be done by your veterinary, a veterinary behaviorist or an animal behavior specialist.

PLEASE NOTE: The information below does not replace a professional consultation with a behavior specialist.

In some cases medical conditions can contribute to aggression. Your cat must have a thorough physical examination and blood within 3 months before a behavior consultation. This is needed to rule out any medical condition that may be contributing the behavior condition. You must determine in what circumstances the pet is aggressive and whether the aggression is toward family members, strangers, other pets in the household, or strange pets.  Keeping a diary is the best way to ensure an accurate record of aggressive displays and see if treatment is decreasing the occurrences. Behavior modification techniques and/or changes to the pet’s environment will be necessary to modify most aggressive problems.  Drug therapy can be a useful part of treatment for some forms of aggression.

Fear aggression arises when a cat is exposed to a perceived treat or stimuli (e.g. noises) that the cat is reactive to, or to situations previously associated with an unpleasant experience.  Many cats may try to escape the area, hide or get up high where it’s safe when their fearful, if prevented from escaping because they are cornered they are more likely to fight.  The best way if you have to approach a fearful cat is to do it in a calm, confident or friendly manner this is likely to be met with a less fearful response.  Fear aggression toward family members might arise out of punishment or other unpleasant experience associated with them avoid any verbal or physical correction.

Play aggression could be a contradiction in terms; because when you’re cat or kitten is playing its having fun and their body language would not be that of a defensive cat. Yes they may grab, bite and chase but these behavior can be redirected into more appropriate ones.

Territorial aggression can be exhibited toward people or other animals usually other cats that approach or reside on your property.  This can happen when you bring another cat into the house, or when their have been living together  quiet happily and one reaches social maturity at 1-2 years of age.  These sudden changes may cause fear or anxiety, territorial aggression often occurs in conjunction with fear aggression.

Predation is the instinctive desire to chase and hunt prey.  The behaviors you may observe include stalking, chasing, attacking, and ingestion of prey animals, these behaviors should not be directed at people or other pets. This behavior can be very dangerous form of aggression, which must be prevented.  If the behavior is directed toward small pets in the home, confining those pets to a room where the cat does not have access is best.

When you’re in pain the last thing you want anyone to do is touch you where you hurt. However, even if your cat is not exhibiting pain, certain medical conditions may make the pet more irritable and prone to aggression.  Fear and anxiety further compound many of these cases.  Unfortunately once your cat learns that aggression is successful in making you go away, the aggression may recur when similar situations arise in the future, whether or not the pain is still present.

Stay away from my babies. This can be modified by using desensitisation and counter-conditioning techniques along with highly motivating rewards, it may be possible to train your cat to accept handling of the kittens.  Once the kittens are weaned, spaying should be considered to prevent recurrence.

Your cat’s aggression is directed toward you or another pet that did not initially evoke the aggression. This is likely to occur when the cat is aroused and you or other pet is nearby or approaches at the time of arousal.  Cats that are highly aroused must be avoided.  Since redirected aggression arises out of other forms of aggression, it is important to identify and treat the initial cause of aggression and prevent exposure to the stimuli that triggered the aggression.

Some cats bite while being petted.  Some cats are intolerant of all handling, but most cats with petting aggression accept a certain amount of petting but then become highly agitated and attack when they have had enough.  This can be difficult to understand since many of these cats seek attention and at the outset seem to enjoy physical contact from the owner.  It seems that these cats have a certain threshold for the amount of physical interaction that they can tolerate. First, identify and avoid responses that might increase your cat’s fear or anxiety and make all handling experiences positive.  When handling, physical restraint must be avoided as cats that are placed in a position where they feel constrained or unable to escape might become aggressive.

Information on the social structure and relationship between cats is continually being updated with new research.  Cats do maintain social relationships when living in groups leading to the speculation that some form of social structure also exists.  Social structures are often maintained with aggressive displays and actions.  Some cats may display aggression toward their owners or other cats when displaying assertiveness.  Since cats are now known to be a social species, it is not surprising that some cats will assert their authority or leadership, when challenged by a subordinate cat or family member in the home.  Social status aggression in most cases is a complicating factor of other forms of aggression.  Assertive displays, soliciting attention through attacks or biting, aggression during petting, attempts to control the environment by blocking access to doorways or refusing to be moved from sleeping areas, stalking family members, and threats or aggression to owners when walking or passing by the cat, may be displays of social status.

Whenever a cat learns that aggression is successful at removing the perceived threat, it’s highly likely that the behavior will reoccur if not escalate because it the aggression has been rewarded. Some forms of aggression are inadvertently rewarded by owners who, in an attempt to calm the pet and reduce aggression, actually encourage the behavior with patting or verbal reassurances.  Pets that are threatened or punished for aggressive displays may become even more aggressive. Aggression gets aggression.

At the end of the day aggression is necessary for survival, but when that aggression is misplaced or is excessive and causing harm to you or other animals it’s not acceptable. Aggression is a very real and serious issue and you should seek help immediately at the first signs of any aggressive display.