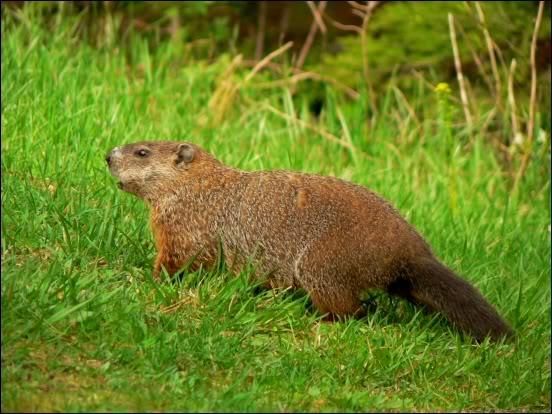 Woodchucks are also called groundhogs, gophers or “whistle-pigs.” Despite their burly looks, woodchucks are shy, timid creatures who pop up in yards after a long winter hibernation. Their burrows usually have several entry and exit points which they scurry into when alarmed. Suburbia provides the perfect habitat — our raised decks, stoops and sheds provide cover and a perfect site to raise young, and our lush lawns and gardens provide a virtual buffet.

Most woodchuck conflicts occur in summer, when the war is on for who gets to eat the garden vegetables! This is also just when baby rearing season occurs, which is why orphaned young will be left behind unless problems are resolved correctly.

This is normal; woodchucks are usually active in the daytime. This does not indicate rabies.

Woodchucks are timid creatures who scamper off when scared. Remember that even a small child looks like a giant predator to the woodchuck. There is no cause for alarm. Healthy woodchucks aren’t interested in children or pets; their diet is 100% vegetarian. If chased, woodchucks will quickly flee to their burrows.

Call Winnebago County Animal Services at 815-319-4100 and keep people and pets inside.

Woodchuck Circling and Falling Over

Call Winnebago County Animal Services at 815-319-4100. The woodchuck may be rabid, but it’s more likely to be a brain parasite called roundworm, which causes symptoms that look exactly like rabies. Either way, animal services can assess and handle the situation. Keep children and pets away from the animal.

Many people let them stay because their burrows don’t tend to undermine foundations or damage sheds/decks. In spring and summer, it’s most likely a mother nursing her young. After the young are old enough to leave the den, you can try to evict the family by putting some Critter Ridder granules (hot-pepper based repellent, available at most garden stores) urine-soaked kitty litter or sweaty, smelly gym shirts or socks into the woodchuck burrow, which may cause them to leave. Once the animals are gone, decks or sheds can be protected using an L-shaped design (see humanesociety.org/woodchucks), but it’s critical to make sure no animals are trapped or babies left behind to starve.

You can exclude woodchucks from your garden by putting up a simple mesh fence (humanesociety.org/woodchucks). What’s needed is a roll of 4-foot-high green garden mesh or chicken wire and some stakes. Once the job is done, it won’t matter how many woodchucks are in the neighborhood because they won’t be getting into your garden! Here are two tips for making a successful fence:

If you don’t want to put up a fence, try the following scare techniques, which do work in some cases:

Set a Trap for a Woodchuck but Caught a Skunk

You can let the skunk out without getting sprayed. Skunks have terrible eyesight and only spray when something comes at them fast, like a big dog who isn’t paying attention to the skunk’s warnings. Move slowly and talk soothingly, and you won’t get sprayed. Skunks stamp their front feet as a warning when they’re nervous, so if the skunk stamps, just remain motionless for a minute until he stops stamping, then proceed. Drape a towel slowly over the trap prior to opening it, which creates a visual barrier that will calm both you and the skunk. Once the trap door is opened, the skunk will make a beeline for home.

Why Not Set Traps?

Trapping isn’t likely to solve the problem. Even in studies where all woodchucks were trapped in an area, others from the surrounding area quickly moved into the vacated niche. In addition, trapping and relocating woodchucks often leads to young being left behind to starve. It’s much more effective to exclude woodchucks from where they’re not wanted.