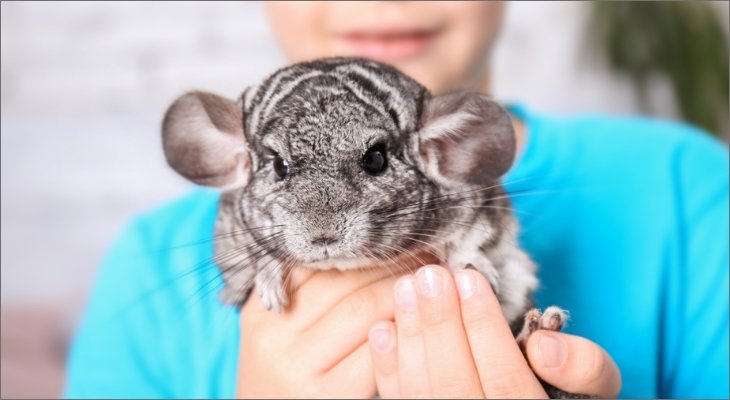 Winnebago County Animal Services adopts Chinchillas to be family pets. Under no circumstances should a Chinchilla be used for food for other animals; for experimentation or laboratory work; or for any other use other than as a family pet. WCAS strictly enforces this policy under the terms of the adoption contract.

Chinchillas are gentle, bright pets that when well cared for, live 12 to 20 years. They rarely bite or act aggressively. They are social creatures and should be kept in pairs. Solitary chinchillas typically become listless and lethargic.

Chinchillas need branches to climb on and enjoy having several places to sit, each at a different height. They do not need a nesting box, but most will use one if it is provided. They should be kept out of direct, full sun, drafts, and the busiest areas of the house. Chinchillas need to “bathe” themselves in a roomy tray of special chinchilla sand in order to keep their coats clean. The sand is expensive, so it works best to move the container in and out of the cage each day to keep it from becoming soiled.

Well socialized chinchillas are easily picked up using both hands to support their body. They should not be picked up by their tails.

A tame, comfortable chinchilla is curious; exploring, sniffing and hopping. A frightened chinchilla will cower in the corner of its cage. When a chinchilla stands on its hind legs it is a sign of increased alertness, which means that it may sense danger or simply be curious.

Chinchillas will “test bite” almost all new objects they encounter for edibility. A finger stuck in a cage will likely get an exploratory bite, and this has nothing to do with being vicious, but can be unpleasant for humans.