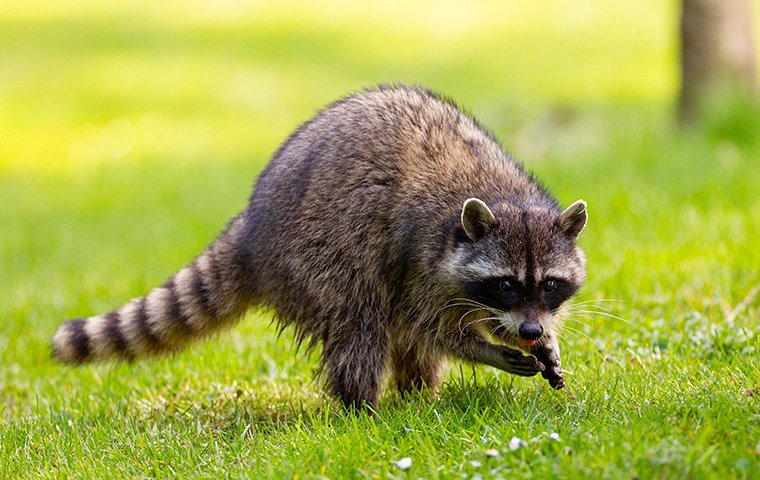 Raccoons are intelligent and highly adaptable mammals. They are characteristically nocturnal, but they may be active whenever it makes sense for them to be. Suburban and urban landscapes suit them perfectly. Chimneys and attics provide great denning sites; pet food and trash left outside provide a free buffet. They adapt easily to our lifestyles, yet people often have wrong ideas about raccoons — for example, that a raccoon seen during the day must have rabies. Raccoons provide free pest control by eating small snakes, mice, rats and grubs.

Raccoons in the Garbage

Uncovered garbage cans provide an open invitation to hungry raccoons. Be sure to securely contain your trash to stop garbage raids. Some options include securing the trash lids with bungee cords, getting an Animal Stopper brand garbage can (equipped with a built-in locking mechanism), putting the garbage out the morning of trash pickup, or getting an outdoor storage container for trash cans from a home building store. Trapping won’t work to solve the problem because as long as there’s a food source, wild animals will keep coming to it.

The raccoons smelled good things and jumped into the dumpster, but now they are stuck there because they can’t climb the slippery sides of the dumpster to get out! Provide an exit route: Put a strong branch or plank-like piece of wood in the dumpster at an angle so the raccoons can climb out. The branch must run from top to bottom and be thick enough to support their weight. The raccoon won’t jump out and bite you; they will huddle nervously in a corner. If dumpster lids are left open all the time, post a big sign advising people to keep the lid closed so animals don’t keep getting trapped inside.

This is not necessarily cause for alarm. Raccoons are active by day when people leave out pet food or when the raccoons have hungry young to feed. Assess whether the raccoon is acting strangely. Are they circling, dragging themselves, acting injured or acting unusually aggressive? If yes, then contact your local animal services agency for assistance.

It’s no wonder raccoons are responding to the free buffet. Who wouldn’t? The best solution is to make a practice of feeding cats indoors. If the cats must be fed outside, feed them only at a certain time in the morning or midday, then quickly take away any uneaten food. The cats will get used to the new schedule and modify their behavior accordingly. Trapping the raccoons won’t help since other wild animals will continually be attracted to the cat food. Plus, baby raccoons will be left behind to starve if their mothers are trapped.

There are effective squirrel baffles that also work to keep raccoons out. A good one is shaped like a stovepipe and placed on the pole portion of the bird feeder. This allows the raccoon to climb up the pole and into the closed pipe, but she can go no further. The pipe must be at least 24 inches long to prevent the raccoon from climbing over it and set at least 4 feet off the ground (up to the bottom part of the baffle) to keep her from jumping over it.

If it’s a raccoon that just wandered in through an open door, remove access to food (for example, bird seed bags) and trash. Then open the garage door before dusk and sprinkle an 8-inch band of white flour under it. Watch for exiting footprints and close the door once the raccoon is gone. If this problem occurs in spring or summer, and the garage door has been open for a longer period, the raccoon is most likely a mother with babies. She is likely to be in the rafters or on a high shelf with her cubs, and you don’t want to separate her from her babies. In this case:

SELF-HELP OPTIONS: Either let them stay until they leave on their own (the kindest and best option), or try to evict them by placing vinegar-doused rags and a blaring radio in the garage near the den site. Keep in mind that it may take the mother a while to find a new den and move her cubs. Typically moms will move their young in response to the harassment, but she may be resistant to leaving right away. A nuisance wildlife control specialist can be called (for a fee) but it’s vital for the caller to emphasize they want the family evicted, not trapped and killed or trapped and relocated. Unfortunately, many nuisance wildlife control businesses routinely kill or relocate wildlife, so we don’t recommend this option.

The best solution by far is to feed cats indoors and not use a cat door. If you have a cat door, purchase a strong, electrically controlled door that only lets your designated pet in through a signal transmitted by their collar. These doors can be found at local pet supply stores.

Raccoons Eating Fish out of Pond

It is difficult to have a delicacy like fish in an area and expect raccoons not to notice! The best solution is to maintain a higher water level (at least 3 feet deep) and stack cinder blocks, large rocks or ceramic pipes in the bottom of the pond so the fish can escape from the raccoons and take refuge.

When it rains heavily or a lawn is overwatered, grubs come to the surface, where raccoons smell them and start digging. Once the lawn dries out — and if homeowners are careful not to overwater — the grubbing should cease. Natural products like “Grub Away Nematodes” (www.gardensalive.com) or “Milky Spore” can be applied to the lawn to reduce grub numbers. They work very effectively if applied properly
(i.e. watered into the ground,and applied at the right time of year). Cayenne pepper can also be sprinkled on more localized digging areas for a temporary repellent effect.

The only answer is to reinforce your chicken coop so the raccoons can’t get to the chickens. Use heavy gauge (16-gauge) 1 inch by 1 inch welded wire to prevent raccoons from being able to reach through the mesh. Although it’s an inconvenience, once an animal pen is well reinforced and maintained, this problem is solved for the long term.

If it’s spring or summer, it’s likely to be a mother with her young. Raccoons move around to different den sites within their home range for a number of reasons. The family may leave on its own, but if tolerance is not possible, then harassment can speed up the process. It is also possible to evict the raccoon using a one-way door (which allows animals to exit but not enter) and an L-shaped mesh design (to prevent digging under the mesh barrier), but it’s critical to make sure no animals are entrapped or babies left behind to starve.

You may also call a handyman or a humane control exclusion specialist for help. It’s important to emphasize the importance of humanely evicting the animals — there is no need to trap and kill them or trap and remove them (which is what most nuisance wildlife control companies do).

Call Winnebago County Animals Services at 815-319-4100. In the meantime, put an upside-down laundry basket over the baby raccoons so they don’t wander off.

Trapping raccoons is not advised for a number of reasons. In spring and summer, babies are often left behind to starve, and trapping rarely solves the root cause of the problem. Safely release the raccoon by first putting a towel over the trap (for a visual barrier, which will calm both the raccoon and the caller) and then opening the door (while wearing heavy gloves).

Raccoons in Attic or Chimney

In spring and summer, mother raccoons take advantage of chimneys and attics for raising cubs. For a raccoon in a chimney, the easiest solution is to keep the damper closed and wait a few weeks for the raccoons to move out on their own. As soon as the cubs are old enough — about 8 weeks old — to go on outings with their mother, she will usually move them to a more accessible den. If you want to prevent reoccurence, have a chimney sweep clean the flue and cap it, but make sure they visually inspect the chimney and smoke shelf to confirm that the raccoon family has moved on.

If you want to try evicting the raccoons, know that raccoons want a quiet, dark and non-noxious-smelling place to raise their young. By creating the opposite conditions, they can be encouraged to move on.

*NOTE: It can be hard to verify whether the raccoons are gone. Before sealing any entry hole, stuff it first with newspaper and see if the paper stays in place for three successive nights. If so, the den has been vacated. After sealing the entry hole with hardware cloth, make sure no raccoons are left behind by leaving sardines or dog food in the attic and checking whether it is uneaten after 24 hours. Or you can sprinkle flour in front of the entry hole and check for the footprints of a raccoon trying to get out. 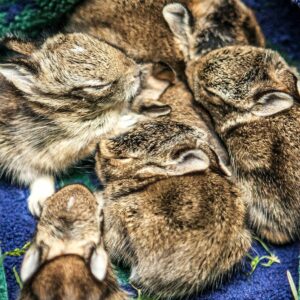 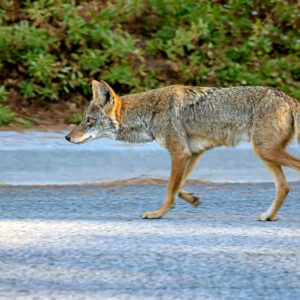 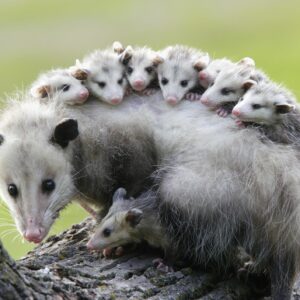