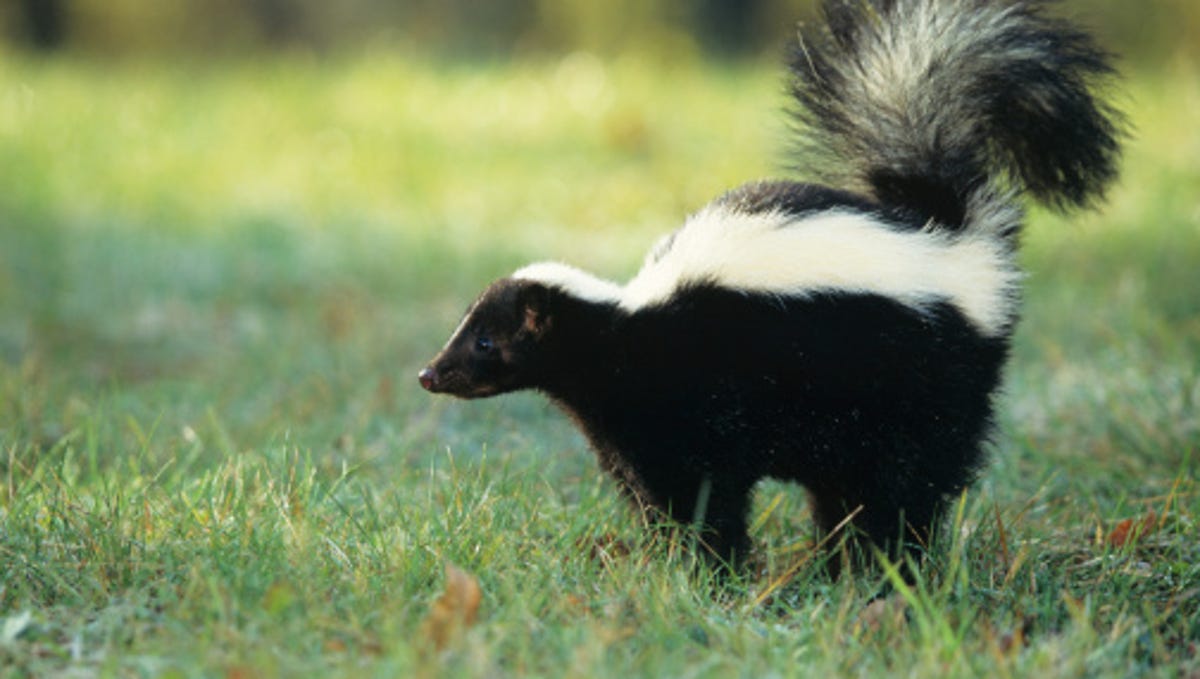 Skunks are gentle animals who tend to be nocturnal, but are sometimes out during the day. They have a tough time living in our suburban and urban landscape. Because of their extreme nearsightedness, they are prone to falling into uncovered window wells and other similar pit-like perils. Then they are unable to escape because of their limited agility. It’s well known that skunks have a noxious-smelling spray that they use to defend themselves, but it is not well known that they can’t “reload” quickly and that they will not spray unless they feel really threatened. So before escalating to this drastic option, they will stamp their front feet as a warning, giving you ample opportunity to back off.

Skunks are extremely beneficial creatures, and their important ecological role is often overlooked because of myth and stigma surrounding their spraying abilities. They provide free pest control by eating everything people don’t like, bugs, mice and baby rats included.

This by itself is not cause for alarm. Skunks are sometimes active by day when people leave out pet food or when the skunks have hungry young to feed. Note if the skunk is acting strangely: Is it circling, dragging itself, acting injured or acting unusually aggressively? If yes, contact your local animal services agency.

Here’s a very effective recipe for quickly de-scenting dogs: Mix a quart of hydrogen peroxide, ¼ cup of baking soda and a teaspoon of liquid dish soap in a large bowl. Apply with a washcloth, rinse and then shampoo the dog (or anything that was sprayed). The odor will disappear within minutes. The dog may have bad breath for a while, though, if he was sprayed in the face.

Call Winnebago County Animal Services at 815-319-4100. In the meantime, put an upside-down laundry basket over the baby skunks so they don’t wander off.

A vial of Odors Away can be purchased from a hardware store to neutralize the bad odor. Put a few drops in a bowl and place in any room that smells. Add new drops every day. If the odor persists for weeks, it may be a dead skunk and professional assistance will be needed.

Skunks wander into garages when doors are left open. To get them out, open the garage door before dusk and sprinkle an 8-inch band of flour under it. Watch for exiting footprints, and then close the door.

The answer is to contain the trash better so that other animals are not able to push over or spread trash on the ground for the skunk to find. Secure trash lids with bungee cords, get an Animal Stopper garbage can (which has built-in bungees), put the garbage out the morning of trash pickup, or get an outdoor storage container for trash cans from a home building store. Trapping won’t solve the problem because as long as there’s a food source, animals will keep being attracted to it.

Skunks fall into window wells because they don’t see well, and then they get stuck because they’re poor climbers.

If the window well isn’t too deep, try putting a wide board, slanted at a 45-degree angle into it with a towel or mesh attached for traction so the skunk can climb out. Another very effective option is to wear gloves and slowly lower a small rectangular plastic garbage can (with cheese inside as bait) into the well. Make sure the can is on its side so the skunk can easily walk into it. Then tip the can up a bit so the skunk doesn’t fall out while he’s eating the cheese, raise it to ground level then slowly lower it on its side so the skunk can amble out. If you move slowly and talk softly, the skunk won’t spray you — they only spray in response to fast movement coming at them. After the skunk is gone, get a window well cover (homemade or inexpensive from home-building stores) or this problem may occur again.

If you are determined and capable of helping, grab hold of the yogurt cup while wearing gloves — the skunk won’t spray anything he can’t see. Upon feeling resistance, the skunk will pull back and his head should pop out. Stand motionless. The skunk will usually blink a few times and then make a beeline for home.

Call your local animal services agency to help remove the yogurt container if it is on too tight or if you are not willing/able to try the self-help option. Put a laundry basket or milk crate (with a heavy rock on top) over the skunk to keep him from wandering off. When his head is entrapped, he may run frantically into the street and cause a car accident.

Skunks fall into pools fairly often because of their poor eyesight. Put a pool skimmer or broom underneath him and gently lift him out. The skunk may be exhausted from swimming and may need some time to recover. If the skunk does not leave on his own after two hours, contact your local animal services agency.

When it rains heavily or the lawn is overwatered, grubs come to the surface, where skunks smell them and start digging. Once the lawn dries out, don’t overwater, and the grubbing should cease. Natural products like “Grub Away Nematodes” (gardensalive.com) or “Milky Spore” can be applied to the lawn to reduce grub numbers. They work very effectively if applied properly (watered into the ground and applied at the right time of year). Cayenne pepper or similar capsicum-based repellents can also be sprinkled on digging areas for a temporary repellent effect.

Set a Trap for a Woodchuck but Caught a Skunk

You can let the skunk out without getting sprayed. Skunks have terrible eyesight and only spray when something comes at them fast, like a big dog who isn’t paying attention to the skunk’s warnings. Move slowly and talk soothingly, and you won’t get sprayed. Skunks stamp their front feet as a warning when they’re nervous, so if the skunk stamps, just remain motionless for a minute until he stops stamping, then proceed. Drape a towel slowly over the trap prior to opening it, which creates a visual barrier that will calm both you and the skunk. Once the trap door is opened, the skunk will make a beeline for home. Important: Don’t set traps at night, or other skunks may get into the trap.

Skunks will take advantage of cavities under decks and sheds to raise their young. However, they leave as soon as the young are old enough. The simplest option is to wait for the skunks to leave on their own and then seal off their entry hole with 16-gauge 1 inch by 1 inch square galvanized mesh. Trapping can result in starving young left behind. Seal off the deck using an L-shape design, but it’s critical to make sure that no animals are entrapped or babies left behind to starve.